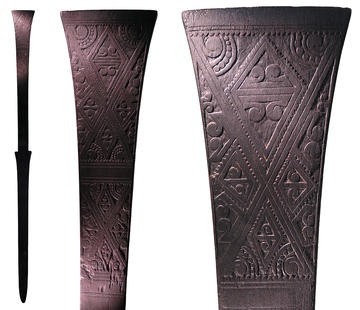 Boutou are large, double-handed clubs, carved of tropical hardwoods and embellished with curvilinear and geometric two-dimensional designs on the broad faces of their terminal ends. Some of these designs are unique, but many show strong stylistic affinities that suggest a regional style or perhaps even the work of individual artists.

These clubs were documented as far north as the Lesser Antilles, and are frequently depicted in the hands of the Kalinago (Island Carib) warriors in 16th-17th century illustrations. As weapons from newly found lands, these clubs took particlar pride of place in curiosity cabinets and early museums in Europe. But they were not simply weapons; like the drug paraphernalia studied as part of jagWARS, boutous were also ritual items in their own right, elaborated beyond their intended purpose to become insignia of rank, status and power.

There are roughly 40 examples of the long variety of club (over 1 meter in length) in early museum collections, and many more smaller examples (averaging ca. 50cm) that appear to be later in date. jagWARS will document the wide iconographic range of club styles, to explore whether it is possible to distinguish chronological placement stylistically.